René Haussin founded SUPERDIET in 1961 in the town of Denain in the north of France between Lille and Valenciennes.

In 1956, René Haussin bought a food and delicatessen store in Denain, France. He began to suffer from pain after renovating the store. He consulted a doctor but nothing relieved the pain.

He started to get interested in the effects of diet and plants and decided to change what he ate and his lifestyle. He gradually saw results and his pain was relieved: from then on René Haussin was convinced of the benefits of plants. He continued to take interest in alternative medicine and particularly naturopathy, a holistic practice that focuses on overall wellness. He qualified as a naturopath and his first consultations encouraged him to continue. He then discovered radionics and received first prize two years running in the annual competition organized by the Club de Radiesthésie de Valenciennes in France.

In 1961 he decided to buy a machine to make tablets from flower pollen. He began making the tablets that he was soon selling in his store and by mail order throughout France. That is how Superdiet began!

René Haussin was ahead of his time and quickly developed a network of like-minded partners interested in organic produce.

He continued to develop other products in Denain. They included capsules and phials. He bought his ingredients from local market gardeners, creating – unknowingly – the first regional network of local producers (Solidarity-based partnerships) and the first organic Superdiet products before the organic agriculture certification was created in 1992.

Since, most of our products reflect our origins. They are made with certified organic plants, fruit and vegetables and we continue to have strong alliances with other like-minded producers. Most of our products – phials, capsules, tablets and powders – are made according to naturopathy principles.

SUPERDIET PROVIDES YOU WITH NATURE’S BEST

Our team has been passing on our founder’s naturopathy heritage and expertise for nearly 60 years to provide you with food supplements made with organic plants…and passion!

At Superdiet, we believe that plants are precious gifts from nature. As such, we ensure they are chosen with great care. We are convinced that balance is necessary for overall health. To that end, we pursue our founder and naturopath Mr. Haussin’s expertise. Our experts – pioneers of organic practices and actively engaged – are passionate and demanding.

They select premium raw materials, develop adapted formulas and strive to use our traditional methods including pure juice extraction and decoction-infusion We are actively committed to social issues and the environment through long-term partnerships with our French producers, hive sponsorship, recyclable packaging… and more and more organic practices and products.

If you do not have a professional account yet, please complete the application form.

Our reputation in the organic food supplement and natural wellness sector is unique.

Choose SUPERDIET, a French manufacturer. We share your convictions about natural health. Our products are made with certified organic ingredients sourced in France whenever possible. Our packaging features clear, transparent information. Our food supplements are stringently controlled at each stage of the manufacturing process and have organic agriculture certification.

We propose a full range of food supplements made with plants and natural ingredients, organic in most cases. 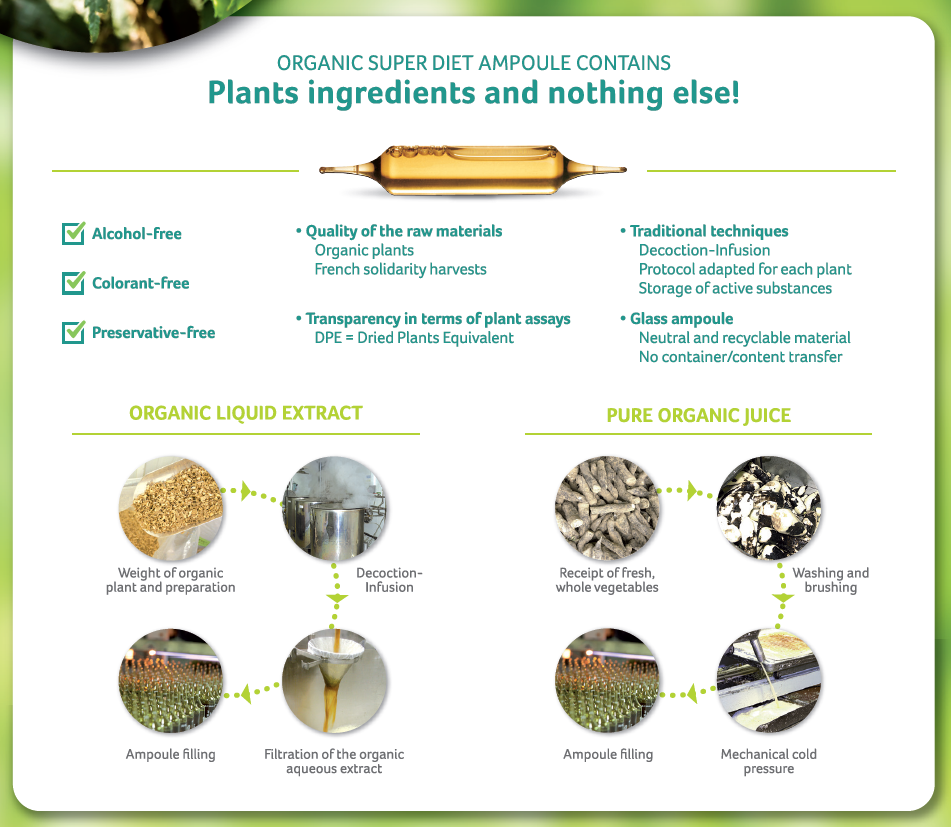